So the Unmade cover has sneaked out, and thus I get to show you guys it in all its glory! 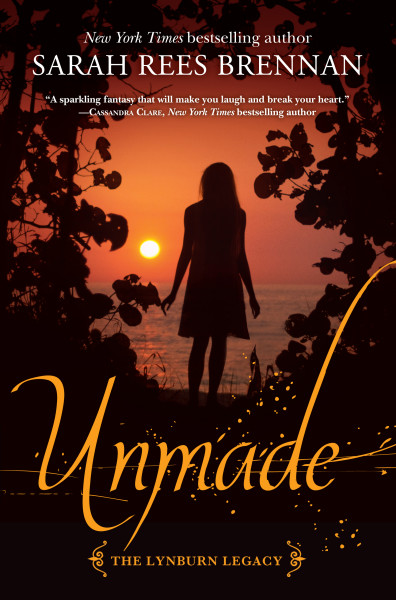 Do you liiike it? I hope so! I like that it has Kami, the Crying Pools, and a SUNSET which implies THE END OF DAYS.

This the back of the book:

Who will be the sacrifice?

Kami has lost the boy she loves, is tied to a boy she does not, and faces an enemy more powerful than ever before. With Jared missing for months and presumed dead, Kami must rely on her new magical link with Ash for the strength to face the evil spreading through her town.

Rob Lynburn is now the master of Sorry-in-the-Vale, and he demands a death. Kami will use every tool at her disposal to stop him. Together with Rusty, Angela, and Holly, she uncovers a secret that might be the key to saving the town. But with knowledge comes responsibility—and a painful choice. A choice that will risk not only Kami’s life, but also the lives of those she loves most.

This final book in the Lynburn Legacy is a wild, entertaining ride from beginning to shocking end.

Unmade is out September 23rd, and I hope more than anything else that you will like the insides. The end of my second trilogy. Am I a grown-up author now? Maybe. Kind of...?

For those who have already seen the cover, I bring you... a snippet.

Unmade is set a couple months after the end of Untold. This is highly spoilery...